I wrote an article about translatio imperii, a medieval theory of the movement of empire, for Profile magazine. 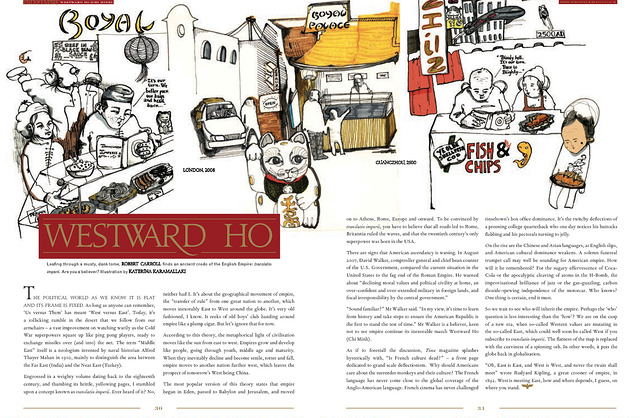 Where do you think of when you think of the West? ‘Hardly one of life’s imponderables, I know. But chances are, you plumped for the United States. Unless of course you are myopic, parochial, border-bound to the shores and cliffs of our tiny island. In which case, you probably picked Slough. Admit it. When it comes to the West, America’s pretty much bagged the worldwide rights, notched up the copyright, trademarked the name. “Go West, young man, go West”. There’s the Wild West, the Western, Mae West.

Maps don’t help. Topography may ostensibly display no favourites, but most maps of the world do not place Russia in the centre of the world with the United States its eastern cousin. It could easily have been presented in such a way. Not so long ago the two superpowers squared up to each other, with Europe laying between them, behaving like testosterone-pumped table tennis players ready to ping pong ballistic missiles over (and into) the net. They could have left Europe out of it and decamped the Baring Straits, where only 53 miles of icy sea and a few polar bears lay between them.

The political world as we know it is flat and its frame is fixed. West versus East, Us versus Them, it’s a rollicking rumble in the desert which we watch from our armchairs. The term “Middle East”, by the way, is a neologism invented by naval historian Alfred Thayer Mahan in 1902 to distinguish the area between the Far East (India) and the nearer East of Turkey. Incredibly prophetic, don’t you think, given the centrality of the region to the world today?

I like prophecies and I like patterns. They offer a glimpse beyond the tick-tock of a day’s 86,400 seconds, something more than the never-ending knock-on of event after event, the rolling news that accumulates into lives lived and lives died.

Anyway, engrossed in a musty eighteenth-century tome, thumbing its brittle, yellowing pages, I stumbled upon a concept know as translatio imperii. Ever heard of it? No, neither had I. It’s about the geographical movement of empire, the “transfer of rule” from one great nation to another. It’s very old fashioned, I know. It reeks of the old boys’ club handing empire around like a plump cigar. But let’s ignore that for now.

According to this theory, the metaphorical light of civilisation moves like the sun from east to west.Empires grow and develop like people. They go through youth, middle age and maturity. When they inevitably decline and fall, empire moves to another nation further west.

The most popular version of this theory states that empire began in Eden, passed to Babylon and Jerusalem, and moved on to Athens, Rome, Europe and onward. To be convinced by translatio imperii, you have to believe that all roads led to Rome, Britannia ruled the waves and that the twentieth century’s only superpower was born in the USA.

There are signs that American ascendancy is waning. In August 2007, David Walker, comptroller general of the US, compared the current situation in the United States to the fag end of the Roman Empire. He warned about “declining moral values and political civility at home, an over-confident and over-extended military in foreign lands and fiscal irresponsibility by the central government”. “Sound familiar?” Mr Walker said. “In my view, it’s time to learn from history and take steps to ensure the American Republic is the first to stand the test of time.” Mr Walker is a believer, keen not to see empire continue its inexorable march westward.

And then the headline on the cover of November’s Time magazine asked, “Is French culture dead?” I have to ask: why do you care? The French language has never come close to the global coverage of the Anglo-American language. French cinema has never challenged tinseltown’s box office dominance. Questions such as these are the twitchy deflections of a preening college quarterback who one day notices his buttocks flabbing and his pectorals turning to jelly.

The Anglo-American language is no longer the world’s default and American culture’s dominance is starting to slip. Chinese and Asian languages are rising in global significance. A solemn funereal trumpet call may well be sounding for American empire.

How will it be remembered? For the sugary effervescence of Coca-Cola or the apocalyptic cleaving of atoms in the H-Bomb, the improvisational brilliance of jazz or the gas-guzzling, carbon dioxide-spewing independence of the motorcar. Who knows? One thing is certain, end it must. So we wait to see who will inherit the empire. Perhaps the ‘who’ question is less interesting than the ‘how’? We are on the cusp of a new era, when so-called Western values are mutating in the so-called East, which could well be called west if you looked at it in a certain way. Thinking like this replaces the flatness of a map with the curviness of a spinning orb. In other words, it puts the globe back in globalisation.

“Oh, East is East, and West is West, and never the twain shall meet” wrote Rudyard Kipling, a great crooner of empire, in 1892. West is meeting East, how and where all depends, I guess, on where you stand.